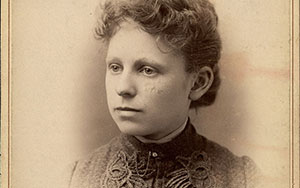 Ten boxes of materials from 1836-2006, pertaining to the life and work of Gratia Alta Countryman. Included in the collection are four boxes of personal and professional correspondence from 1876-1997. Two boxes of speeches and other writings related to the library profession and the Minneapolis Public Library from 1904-1948, as well as clippings from 1888-2006. One box of photographs, a drawing book, an autograph book, and a Countryman family photograph album. Also in the collection is a box of biographical honoraria, ephemera, and mementos; one box of documents regarding the Countryman legacy and estate; and a memory book created by the staff of Minneapolis Public Library on the occasion of Countryman's retirement.

Gratia Alta Countryman was born November 29, 1866, in Hastings, Minnesota, the daughter of pioneer parents Levi and Alta Chamberlain Countryman. She received her baccalaureate degree from the University of Minnesota in 1889, intending to become a teacher but Herbert Putnam encouraged her to apply for a position at the Minneapolis Public Library which was to soon open under his direction. She began as a cataloguer on October 1, 1889, helping to classify 30,000 volumes before the library began circulation, starting a lifelong career with the Minneapolis Public Library. After one year, she was promoted to head of the catalog department, and two years later, in 1892, she was appointed assistant librarian to James K. Hosmer who had then succeeded Putnam. In 1904 she succeeded Hosmer as chief librarian, becoming the nation’s first female head librarian. Countryman was chief librarian for over thirty-two years until 1936 when she was required to retire at the age of seventy. She was then made librarian emeritus.

Upon Miss Countryman’s promotion to chief librarian she immediately began to make changes, expanding the Library’s services to reach more and more people. In the thirty-two years she directed the Library, service expanded into all areas of the city including elementary and junior high schools, hospitals, engine houses, welfare centers, and factories. By the time of Miss Countryman’s retirement, the book collection had increased to 662,842 volumes and the circulation, which was 519,000 in 1904, had increased to 3,293,484 in 1936. The number of registered borrowers had increased from 40,500 in 1904 to 181,582 in 1936. Of the 11 branch library buildings in Minneapolis, 9 were built during her administration. Miss Countryman was instrumental in local, state, and national library work, and was elected President of the American Library Association from 1933-34 becoming the sixth woman to hold that distinction in the association’s hitherto sixty year history. From 1938 until 1941, Miss Countryman was the head of the newspaper indexing project for the Works Progress Administration at the Minneapolis Public Library.

Civic-minded, socially aware, historian, visionary, educator, social worker, missionary, leader, are all terms that have been used to describe Gratia Countryman. Her vision of library service was expressed in the many speeches she gave, the journal articles she wrote, and especially in her annual reports. The first annual report she submitted included the following view of a library’s purpose:

“A Public library is the one great civic institution supported by the people which is designed for the instruction and pleasure of all the people without age limit, rich and poor, without class limit, educated and uneducated, without culture limit…. It should be “all things to all men” in the world of thought…. The library should be a wide-awake institution for the dissemination of ideas, where books are easily accessible and readily obtainable. It should be the center of all the activities of a city that lead to social growth, municipal reform, civic pride and good citizenship. It should have its finger on the pulse of the people, ready to second and forward any good movement…. It should be a quiet retreat for the scholarly man, and the most inviting and hospitable of places for the ordinary reader or casual visitor…. It is obvious that if a library is to perform its function of elevating the people, it will need to adopt methods other than buying a fine collection of books and housing them in an attractive building and then waiting in a dignified way for the people to come. The scholarly and studious will come as surely as the needle turns to the north, but the others will wait until the library goes to them…. How to reach the busy men and women, how to carry wholesome and enjoyable books to the far-away corners of the city, how to enlist the interest of tired factory girls, how to put the workingman in touch with the art books relating to his craft and so increase the value of his labor and the dignity of his day’s work—these are some of the things which I conceive to be my duty to study, if I would help this public library to become what it is for.”

Gratia Countryman died in Duluth, Minnesota, on July 26, 1953. She had never married but was survived by her adopted son, Wellington Greenway Countryman.

Pejsa, Jane. Gratia Countryman: Her Life, Her Loves, and Her Library. (Nodin Press, 1995)

Some of the materials of Gratia Alta Countryman were donated to the James K. Hosmer Special Collections Library at the Hennepin County Library by Mr. Robert Shaw and Mrs. Virginia Buffington Shaw in July of 1997 as accession 1997.01, and a second set of papers was donated by Mr. Robert Shaw in December of 2008.