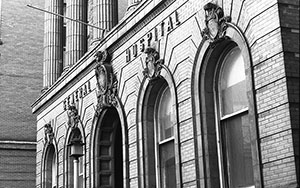 The photocopied volumes consist of images mainly depicting various Jones family members (at home and on excursions) but include occasional buildings and rooms, including Jones' college dormitory room and architectural offices.

The physical collection is available for use in Special Collections during the department's open hours. Photographs from this collection are available in the Kate Johnson Collection on Harry Wild Jones in the Hennepin County Library Digital Collections.

Harry Wild Jones, the son of a Baptist clergyman and twenty-seventh in a direct line of descent from William the Conqueror, was born in Schoolcraft, Michigan, on June 9, 1859, and graduated from the Massachusetts Institute of Technology in 1882. Having worked under Henry Hobson Richardson in Boston for one year, Jones came to Minneapolis, Minnesota, in September 1883, establishing his own architectural practice there in 1885, where he remained for the rest of his career. Although Jones specialized in ecclesiastical architecture, he also designed many private residences and public and commercial buildings in the Minneapolis area and throughout the United States. He taught architecture at the University of Minnesota and lectured on church architecture at the University of Chicago.

Some of his most notable Minneapolis buildings include Butler Brothers Warehouse (Butler Square), Cream of Wheat building, the award-winning Lakewood Cemetery Chapel, the first Lake Harriet Pavilion, Washburn Park water tower, and the Nicollet Ball Park. Other Minneapolis buildings include the Eugene Field Public School, the churches of Calvary, Knox Presbyterian, and Judson Memorial, and the homes of F.W. Clifford, Emery Mapes, and L.S. Gillette. He served as a member of the Minneapolis Board of Park Commissioners for many years and was the architect for park buildings. He also served as director of the Minneapolis Society of Fine Arts for several years.

Jones died in Minneapolis, on September 25, 1935, at Elmwood, his home in Washburn Park (a neighborhood often referred to as Tangletown).

Collection was donated at some point, perhaps in the 1990s, by Tom Balcom, who had received the materials from Kate Johnson, their creator and owner. A formal donation was made by Kate Johnson in October 2017.