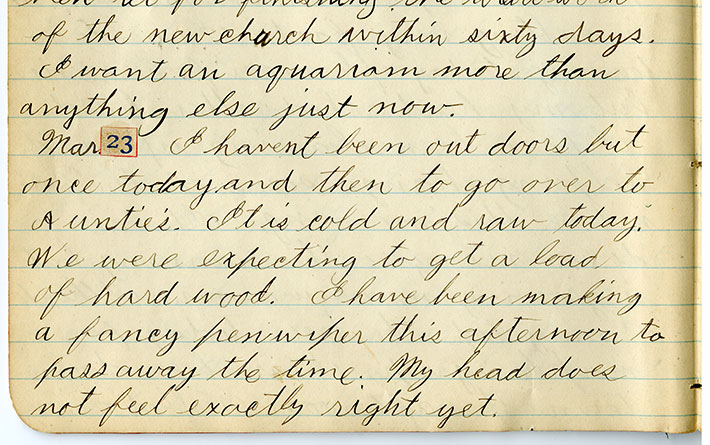 1 Box with 7 diaries, description by Martha Bray of highlights of the diaries, a release written when the collection was digitized by the Minnesota Digital Library.

The physical collection is available for use in Special Collections during the department’s open hours. All diaries from this collection are available in the Ezra Fitch Pabody Diaries in the Minnesota Digital Library.

Ezra Fitch Pabody, ( February 21, 1868-December 17, 1940) was a draftsman for Harry Wild Jones and contract manager for American Bridge Company. Ezra began keeping a diary in 1882 when he was 14 years old; the collection includes 7 journals ending in 1890. In 1882, he lived with his parents Ezra and Emma (Brown), his sister Nellie and later his aunt Myra Brown in downtown Minneapolis. Ezra’s father owned a drug store and was active in city mission work with Westminster Church. The journals chronicle everything about his daily life, school, family, church, exercise, nature, and explorations of the city.

Ezra Fitch described many interesting historical events in Minneapolis. He noted the shooting of Jesse James, the killing of three bears at Lake Calhoun, the day he went with his Aunt Myra to listen to Mark Twain speak at the Grand Opera House, and the electric light mast at Bridge Square. Ezra Fitch spent much of his time in the summer of 1882 catching insects, moths and butterflies attracted to the new electric lights. Ezra and his sister Nellie were great readers and used the Athenaeum and his school library to borrow books.

In 1885 Ezra Fitch’s family began building a cottage on Lake Minnetonka in Zumbra Heights. Ezra drew plans and specifications for the cottage. The family traveled between their home in downtown Minneapolis and their cottage at Lake Minnetonka on the city’s streetcar system, eventually settling at the home on Lake Minnetonka.

In 1888 Ezra began to work as a draftsman for Minneapolis architect Harry Wild Jones, Ezra worked on plans for the city’s new Municipal Building for many months. He later worked for American Bridge Company and lived with his sister Eleanor and her husband Ward Benton.

In 1901 he was the member of the jury for the murder trial of Lannie Day, who was killed by Fred Hamilton in a drunken brawl at the West Hotel. Fred Hamilton was charged with murder but the jury was divided over the evidence and circumstances of the case. Eight out of the 12 jurors wanted a acquittal. Instead of a hung jury, the jurors decided on a compromise, they found Hamiltion guilty of first-degree manslaughter. Hamilton was released from print on October 7, 1904.

Ezra and his family are buried at the Lakewood Cemetery in Minneapolis.