Collection on the Dayton and Winchell Families 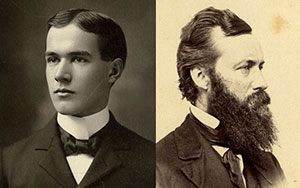 The Dayton-Winchell collection consists of 5 boxes which contain a number of items including: personal papers, journals, photographs, and a number of books and biographies.

Both the Daytons and the Winchells are very old families whose history can be traced not only to Minnesota, but to the whole of the United States. The families were united by marriage, and consisted of doctors, scientists, and businessmen. From these families a number of influential personalities emerged which had lasting effects on the state of Minnesota.

George Draper Dayton was one such personality. He was born in 1857 to a New York physician. Before coming to Minnesota he worked for various lumber and coal yards in Starkey, New York in the 1870's. He worked unloading coal and lumber cars for the clients of the yards. In addition, he also solicited sales in one yard owned by a Mr. McMillan. He was so successful at this that his commissions totaled around fifteen hundred dollars. Mr. McMillan, being unable to pay this amount, Suggested that George buy the yard. On September 1st of 1874 he came into possession of the coal and lumber yard. However, he ended up seven-thousand dollars in debt, and fell ill due to over work in 1877. In the end he sold the yard for a down payment on a house in Geneva NY. This house was later sold to purchase land in Worthington, Minnesota in 1883.

In 1878 that he married his wife Emma Willard Chadwick. The two began seeing each other when she was 16 and a student at a seminary in Starkey, New York. During her life she made a name for herself from her frugality, charity, and modesty. They would have 4 children between 1880 and 1889: David Draper, Caroline Ward, George Nelson, and Josephine.

Dayton had been visiting the Bank of Worthington in Minnesota since 1881, and decided to move there in 1883 in order to track the investments of his peers in New York. By 1883 he had decided to buy the bank. After taking control he tried to promote the use of the prairie land that was present in southern Minnesota. He and his bank would encourage farmers to buy and develop the land, and he spent the 1880's involved in land sales, loans, and banking.

In 1890 he and his bank decided it would be good to diversify by investing in businesses in the city. In 1895 the Westminster Presbyterian church on Seventh Street and Nicollet Ave. burned down. The church was rebuilt at Twelfth Street and Nicollet, but the congregation could not pay for all of the construction. They approached Dayton and his bank to buy the land at Seventh and Nicollet in 1901 which he agreed to do. By 1902 a six story retail space was built, and Dayton ended up becoming a merchant running a dry goods store. This was the Beginning of the Dayton Company. The store did very well, and eventually the entire building was occupied by the Dayton Company. The building had to be expanded a number of times between 1907 and 1946 to accommodate Dayton's growing commercial interests.

Dayton remained president of the Dayton Company until February of 1938 when he died as a result of a heart ailment.

While Dayton was making his way in finances, Newton Horace Winchell was becoming an eminent Geologist. He was born in East Duchess County, New York in 1839, and traveled to Connecticut to attend school. By the time he was 16 in 1855 he was teaching in a public school there. In 1857 he moved to Michigan with his brother, and continued his teaching career while he attended the University of Michigan. It was during this time that he met Charlotte Imus who was teaching at Albion College in Michigan.

Charlotte was a professor and an active member in the temperance movement. In 1875, when women were allowed to serve on the State Board of education, she was elected its secretary. Her activism resulted in laws requiring education on drugs and alcohol in Minnesota public schools. The two married in 1864, and moved to Minneapolis in 1872 where they managed a college boarding house. She would also help her husband with his scientific studies, and was the editor of "The American Geologist" which he founded. Furthermore, she would publish the journal by herself when her husband was on expeditions. Between 1865 and 1881 they would have five children: Horace, Ima, Avis, Alexander, and Louise.

It was also in fall 1872 that Winchell began the work he is best known for. He started geological survey of the state of Minnesota. He was provided with one thousand dollars and free railroad passage by the Minnesota legislature. By December 31st of that year he had submitted his report to the University of Minnesota Board of Regents. This was to be the first of twenty-four such reports. He left Minnesota briefly in 1874 on an expedition to South Dakota under the command of General George Custer. On this trip he created the first advanced geological map of the area, and also discovered gold. Also he was later credited with discovering the iron ledges in northern Minnesota in the late 1870's. In addition, he was also one of the first state geologists of Minnesota, was an eminent professor within the University of Minnesota Geology program, was tasked with the examination of the Kensington Rune Stone, and helped preserve St. Anthony Falls which provided power for Minneapolis milling industries. However, his studies were not limited to geology and he also took an interest in the native peoples of the state. He identified native burial mounds near Lake Minnetonka as well as other places in the state. In addition he wrote a volume describing the native peoples of the state of Minnesota.

Winchell died due to illness on May 2, 1914. Family legend states that he predicted the beginning of the First World War before he died. His wife Charlotte continued her work in temperance and education until her own death in 1929.

It was in the next generation that the families would be tied together by the marriage of Louise Winchell and David Draper Dayton. David Draper Dayton was born 13 June, 1880 while his family was still living in New York. He learned the value of hard work at an early age after the family moved to Worthington Minnesota. When he was in high school he would rise at 4AM to do janitorial work at his father's bank. In addition, he was a good student and graduated from high school as Salutorian at age 17.

During his time in high school he traveled to Minneapolis for a year to study Greek at the University there. While he was staying in the city he lived with Professor Newton Horace Winchell, his wife Charolett, and their youngest daughter Louise.

Louise Winchell was born on March 19, 1881. Her family had always considered her a weak child, and so she was held back from entering school. However, this would not be a permanent situation. At the age of 14 she accompanied her mother to France. There she attended school in Paris, and learned to speak fluent Parisian French. In addition she became an accomplished piano player. Furthermore, by 1903, she had completed a year of study at the University of Minnesota, and graduated in 1927 after a long hiatus.

David Draper meanwhile entered Princeton University, and worked construction on his father's store during breaks from school. He graduated from Princeton in 1903, and married Louise in December of that same year. Between 1906 and 1911 they would have three children: Ava Louise, George Draper II, and Ward Winchell. He began working in the family store after graduation, and by his second year he was named secretary and treasurer of the company. While working in the store Dayton found that his forte was in merchandising and finances. He used this not only to further the company's agenda, but also to help found the Retail Research Association.

In addition to his work at the store, he also served in several other capacities in the city. He was trustee of the Minneapolis Public library for 12 years. Also, he served as a member of the Tax Equalization Board of Minneapolis, and on the board of directors of the First National Bank of Minneapolis. Furthermore, he was a director of the Minneapolis Symphony Orchestra Association, and an Elder of the Westminster Presbyterian Church from 1910 until his death.

Also Dayton loved games and athletics. He played billiards often until the game received a bad reputation due to the proliferation of pool halls. In addition, both he and Louise were avid golfers who played at a number of clubs in the Minneapolis area.

It was on one of these golfing trips that tragedy struck. On July 22, 1923 he suffered a heart block while playing a game. He recovered briefly and insisted not only on finishing the game, but also driving himself home. On July 25th he died due to complications of this attack.

These are just examples of some of the people who were a part of these two influential families.