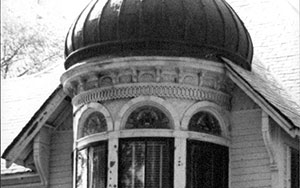 The collection consists of 14 boxes and 9 binders of material from the Minneapolis Model City Program. It contains studies, surveys, reports, and organizational materials that document the condition of south-central Minneapolis in the late 1960s and early 1970s, as well as the future that planners envisioned for it.

Boxes 1-2 and 8 contain drafts and final reports from the program's many committees, meeting minutes of the Policy and Planning Committee, and organizational information. Boxes 3-4 and 9-10 contain publicity material, calendars, memoranda, and meeting minutes of program committees and subcomittes. Boxes 5-7 contain files and photographs that document the condition of buildings, listed by address, within the Model Neighborhood Area as part of a housing survey. Boxes 11-12 contain preliminary and official program planning and evaluation documentation used for reporting to the U.S. Department of Housing and Urban Development and the City of Minneapolis. Box 13 contians aerial photographic negatives of the model city region.

In 1966, in the midst of aggressive inner-city urban renewal projects and urban rioting, the Johnson administration devised a community-driven urban renewal policy through the newly-created Housing and Urban Development (HUD) Department. In 1967, the "Model Cities" program gave $11 million in grants to 65 projects in 63 cities across the country that ranged in size from New York City to Pikeville, Kentucky.

Beginning in 1968 and continuing into the mid-1970s, the Minneapolis Model City Program operated as free-standing entity with its own staff, working in conjuction with the City of Minneapolis to improve urban neighborhoods by involving residents throughout the planning, implementation, and evaluation process. Minneapolis selected a large portion of south central Minneapolis as its "Model Neighborhood Area." The program sought to address physical problems, such as substandard housing and deterioration, as well as social problems in education, heathcare, and other social services. Particularly in the initial planning process and in its final evaluations, the program recieved mixed reviews from local and national media. With constant cuts to funding, the program realized a fraction of its original goals, yet it ushered a new generation of urban leaders, especially those from communities of color.

Boxes 1-7 of the collection were processed and organized by Stewart Van Cleve in 2015. Additional organizational material, reports, meeting minutes, and planning documents produced by the Minneapolis Model City Program and received from the City of Minneapolis were added to the collection by Wendy Guerra in 2016. Aerial Photographs were added by Jenna Jacobs in November 2019.