Collection on the Minneapolis Public Schools 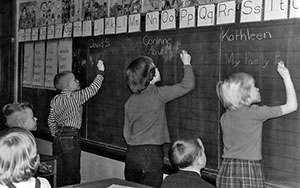 The collection consists of material pertaining to the Minneapolis Public School District assembled by staff at Hennepin County Library Special Collections. The bulk of the collection contains newspaper clippings, commencement and event programs, reports written by the School District and other agencies, curriculum guides, explanatory and promotional brochures, summative school histories, handbooks, other miscellaneous print material. The collection also includes a substantial number of photographs, as well as some audio-visual material and realia pertaining to specfic schools. Much of the textual material in the collection is organized into files providing background information on specific schools and files related to subjects affecting the school district as a whole. Major topics represented in the collection include school buildings, student activities, staff, teaching, and finances.

Researchers should note that because the collection was assembled from several sources there are many chronological gaps in the material. Effort was made to highlight significant gaps, but there may be gaps within date ranges given for specific files or runs of programs and clippings.

The collection does not contain material related to adult education classes sponsored by the Minneapolis Public Schools. School newspapers and newsletters for which Special Collections maintains substantial holdings are not included in this collection. See the Related Materials note for a list of titles in the Minneapolis History Collection periodicals. Literary magazines and yearbooks are also not included.

The Minneapolis Public Schools (later known as Special School District No. 1) were started in the 1850s, shortly after public education was established in the state of Minnesota. Schools included elementary through high school-age students, but it was not until the 1870s that Minneapolis established a formal high school curriculum. Union School was erected in 1858 and was the first high school in the city. One of the next schools to be built was Central High School in 1878. By 1900, there were 60 schools in Minneapolis serving over 36,000 students. Only five schools constructed before 1900 still stand, and only one, Pratt School, is still in use as a school. Early curriculum emphasized vocational training, especially at the high school level. Home economics, manufacturing, bookkeeping, and typing were all taught in the public school system in the early 1900s. Health education and physical education were also componenets of the curriculum.

In 1917, Franklin Junior High School, Minneapolis' first junior high school, was constructed to serve students in grades 7, 8, and 9. By 1930, enrollment in the Minneapolis Public School District had risen to 88,000 students attending at 111 schools across the city. In the 1930s, curriculum in junior and senior high schools continued to include economic and industrial arts courses, but vocational education was mostly limited to the Boys' Vocational High School and the Miller Vocational High School for girls.

After World War II, enrollment had decreased from its peak of over 90,000 in 1933, but the postwar baby boom brought another increase in enrollment. Throughout the 1950s and 1960s, districtwide enrollment stayed above 70,000 students. In elementary schools, curriculum focused on reading and language skills. For students in junior high and high schools, curriculum continued to be focused on preparing for specific vocations. Students could also participate in the Common Learnings program, an elective course of study which promoted civic involvement through the study of personal and social problems.

In the 1960s, community members began urging the District to integrate minority students into majority white schools throughout the city. Before the 1970s, schools in Minneapolis did enroll both white students and minority students in the same schools, but many schools had very low minority enrollment. In 1970, the State of Minnesota required that no school could have more than thirty percent minority enrollment. This prompted over three dozen elementary schools, Folwell Junior, Nokomis Junior, Anthony Junior, Sheridan Junior, Northeast Junior, Roosevelt High, South High, Southwest High, West High, Edison High, Henry High, and Marshall-University to increase minority enrollment. However, in 1971, the State found that many schools in Minneapolis were not in compliance with its requirements and ordered the District to develop a new desegregation plan. The District's new plan aimed to change attendance patterns by pairing and combining elementary schools. The plan also reduced junior high schools to two grade levels and increased high schools to four grade levels in order to expose students to classmates from a broader attendance area earlier in their school careers. Support for school desegregation was mixed throughout the city and varied by neighborhood. Some predominantly white areas of the city had a substantial number of residents who held racist views and opposed integration. The District's desegregation plan required busing many students outside of their home neighborhood. This became a point of contention, particularly in Northeast Minneapolis, where students from North Minneapolis were to be moved to new schools.

The collection is organized into the following series:

The collection was compiled by Hennepin County Library Special Collections staff over several decades. It includes several small donations of material pertaining to specific schools in addition to a larger system-side donation and clipping files from the Minneapolis History Collection. Donations included the following:

The collection was processed by Carissa Hansen and Bailey Diers in 2016. Additional Central High School Handbooks added in July 2019.